Posted on March 26, 2013 by scribblersinkblog 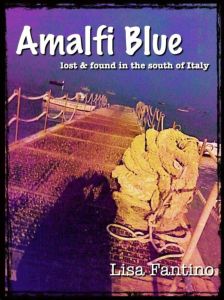 First a few interesting facts about our author:

Lisa Fantino is an award winning journalist turned attorney. During more than 20 years at New York City’s top radio news stations, WCBS-AM and WINS-AM, and as an anchor at the NBC Radio Networks, she interviewed everyone from Mick Jagger, Robert Plant and Jon Bon Jovi to Walter Cronkite, Yogi Berra and a few world leaders, along the way. Sprinkle in her liaisons with some A-list rock stars and a true romantic, wanderlust spirit and you’ll understand why “fire and salsa” is the only way to describe this street-wise, sassy reporter with a Sicilian temperament. While she has traveled the world, both for work and play, Lisa’s soul is always happiest in Italy. When she’s not flying here, there and everywhere, her homebase is New York, where she lives on a diet of Salsa On2 and dark chocolate.

What would you most like your readers to know about you?

Nothing. Truly. After 20+ years on the air in NYC, there is nothing I value more than my privacy. The fact that my first book is a memoir is even a shock to me…but hell, it was cheaper than therapy!

Tell us a bit about Amalfi Blue.

What inspired you to write about such a personal experience?

The entire project started as a diary during my expat sojourn. Writers write and in my isolation, it began as a conversation with myself.  It is only in the absence of distractions, the noise of daily life, that you can find your center and focus on what is important.

What was the transition like from journalist to travel writer?

What transition? Lol I am a news reporter, whether it’s intervieiwing a rock star or climbing Mt. Vesuvius, it’s all news.

Where Amalfi Blu is part memoir/part Travel essay, did you do a detail outline or did the story progression evolve as you wrote?

I know some people say writing is hard and there’s a process but when you’ve done it professionally for as long as I have, it is like breathing. The way you read it is the way I typed it.  I think and write in :30 soundbites.  The only organization came when I had to decide whether to make it a daily journal as I had written it or to cut and paste it into chapters with a flow. I chose the latter to give it better continuity.

Are you a one genre writer or do you feel you will cross over to others?

Amalfi Blue is the first published book but I started and finished my first novel in law school. Now, it sits somewhere on an old Mac disc. Then there’s the sequel, which is half finished. The protagonist is a no-nonsense news reporter and I am sure that Mickey Malone will be introduced to the masses soon.

What was your biggest obstacle form getting from first draft to publication?

Funding. I am such an over-achiever that releasing a free ebook was not enough for me…..My motto is always go big or stay home.

What is your ultimate goal as a writer?

To have more people read my work so that I can buy a beach house and just write on the deck as the ocean tickles my imagination.

Can we have an excerpt from Amalfi Blu?

I hadn’t noticed him before, maybe the crowd had obscured my view or perhaps I just wasn’t ready for him. . .yet, there he stood, like the sun-tanned descendant of Apollo himself.

“So, you like Capri,” he asks. . . His dark eyes peered over his black sunglasses like deep pools of liquid chocolate, melting my veneer.

The smiles were brief. The greetings exchanged in two languages but it was the silent discourse that resonated between us and the ferry crowd melted away in the Bay of Naples.

How do you balance the need for self promotion vs your writing time?

Oh my God, you forgot to toss in maintaining a law practice and a travel concierge service company. I need an escape.

What writing project are you currently working on?

Since Amalfi Blue is only 2 months old, it’s still all about the promotion right now. As soon as I can breathe again, I will tackle the treatment for its screenplay and then hopefully the next book.

Do you have a favorite time of day to write?  Favorite place?

If you could meet one author (dead or alive) who would it be?

God. Did he outline my life before he set the play in motion?

If you could sit down to dinner with any of your favorite fictional characters who would it be?

Anne Perry’s Charlotte Pitt. She and I would definitely be BFFs.

Go to snack when writing?

If you were asked to give your two top pieces of advice to an aspiring writer, what would they be?

Write because you cannot imagine not writing and don’t expect to get rich. Support yourself doing something else.

If you were given the opportunity to travel to and write about any place in the world (other than Italy) where would it be?

Probably Australia because it’s been on my travel wish list for about 20 years.

Thank you for joining us today at Scribbler’s, Lisa!

To keep up with Lisa, check out her website at:

This entry was posted in Author Inerviews. Bookmark the permalink.

for the love of romance

Not all those who wander are lost - they are heartbroken. Musings and advice from a girl that roams the world looking for her place in it.

Write your best story. Change your life. Astound the world.

Create your own adventures for less

Not just another Romance blog

Wanderings of a Rediscovered Nomad